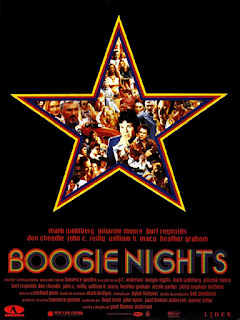 At the Glasgow Film Theatre watching the film Boogie Nights (which I have not seen). Some pals seated on my left, 'Sporty' Spice then 'Posh' Spice to my right. I had a shoe 'Posh' had given me in my bag and delighted in showing it to 'Sporty'-


The screen curtain on the right kept drawing and obscuring half the screen, much to everyone's dismay. Two usherettes eventually appeared to calm the audience outbursts. As the curtain drew across the screen for the third time I went ballistic, only to be collared by an usherette. Oddly, her having decided to throw me out, the exit was only accessible by being marched to the front of the cinema and ascending a metal rung ladder that would take me up and in amongst the ceiling lighting above the stage - visually more reminiscent of the theatre at this point - then over and down another metal ladder to where the exit was. About halfway through my negotiation of the overhead lighting – in between stage and spotlights – that I went mental. Another furious outburst. The usherette's response was one of equal venom and I went quiet, going down the other ladder and towards the exit where the other usherette was waiting. Just as I was about to leave I suddenly remembered I must have left my watch and, rather than going back over the screen, I raced back through the audience to get it. This was a scary moment as I blatantly disobeyed the furious usherettes. However, I retrieved my watch – which was more like a stopwatch in shape – and made my exit sharpish- 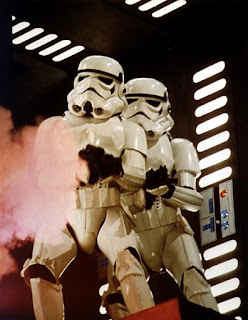 From this point on things got rather confusion. I was certainly being pursued for my life by white clad figures that I suspect were Imperial Stormtroopers, but the vibe was very Tom Baker-era Doctor Who, another childhood favourite-
at February 03, 2020