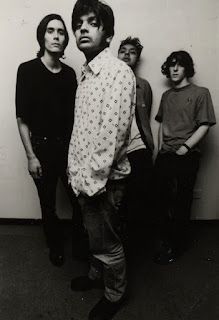 Aboard a steam engine. I am in the cab and the driver is my father's friend Jay EmmCeeEmm. The engine has a huge, bright red, thickly ribbed plastic(?) 'coat' along the (considerable) length that covers the entire top and sides, of the boiler. I am sure the engine belongs to my father. I ask Jay if he has seen or driven the engine before. He has, reminding me of a time...? I vaguely do recall this and accept his reasoning. We start to steam, not on a track but on a road, driving a little too fast (for my liking). Country road with fields and grass verges (sometimes fenced) to either side. My view is straight ahead, not as if from the cab but right at the front, so nothing in front is obscured. The road seems a little tight as we speed past the occasional car coming in the opposite direction-


Soon the surrounding landscape has become (to my concern) more like winter, with sprinklings of snow and visible tyre tracks on the road surface. We then begin passing women on horseback, often speeding by them uncomfortably close, so much so that the panic of the horses is clearly visible. Jay is not bothered when I voice my concern. At one point a woman rider on a horse with a smaller pony behind is approaching. The pony panics and flits momentarily in front of the engine but we narrowly miss it as it takes to the steep (fenced) verge on our left, thrashing about and and shying away in fear. The very next horse and rider suddenly divert into our path at the last minute and, as I brace for a collision, they leap into the air to jump over us (as if showjumping). I very much doubt they will make this leap, even at the speed we're going, and ask Jay what he thinks. He says they made it and though I am not convinced the image of the retreating road in my mind's eye offers up no clue. On our final pass we whizz by a carriage, drawn by four horses and with a sort of trailer in tow-


My friend Pee Dee and I are going to see the band Cornershop in concert at Glasgow University's Queen Margaret Union. It is the first time I will have seen him in around twenty years (and in the back of my mind I am anxious that our evening goes well). The gig starts at 7:30 and I expect the support band to be on stage around 8:00. I am in a shop planning to buy beer for us. I am sure I have 4 cans of Tennent's Lager at home so am a little puzzled as to why I need more – with time feeling tight I doubt we will have a drink at home before the gig. I make my way to the far left corner of the shop where there are two shelves adjacent to one another, one on the left hand wall and the other on the back wall. I look at the beers selection on the back wall. On a more thorough inspection these are not fancy foreign beers like I thought, but instead small jars full of pickled mushrooms. I turn to the shelf on my left which does have a more eclectic selection of foreign bottles. But the strange bottle I inspect – stubby, half full, with a long thin neck – is in fact open. A similar looking bottle behind that also appears to be open and empty-
at February 11, 2020