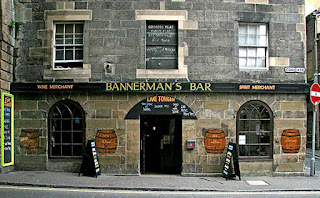 
I am in the private/staff part of some rundown bar/pub. Or it might just be a sort of dingy 'L' shaped cul-de-sac languishing near the toilets? The walls are a greeny brown, streaked, the paper flaking and peeling. Feels particularly grim and grimy. I am talking to my friend Arr Haitch, who sits sort of perched in front of a window, talking up close. The view is dark beyond him, some small lights still visible within the nighttime reflection. Am I already talking about Agent Johnny and how my visit was? Or am I struggling to remember it? I ask about the vandalism to the backstage area at Bannerman's Bar and if Arr was there or had seen it. He says something about the band and the vandalism, but either I don't completely understand his accent or another noise drowns it out. Is someone standing (my friend Gee Ayy?) round the corner from Arr, mostly hidden from my view by the turn of the wall. I decide to leave when all I can see are these scuffy shoes and a stream of arching piss from that person. Do I take some pills/medication?-

Have I been to visit Agent Johnny? (The notion that I saw him but cannot recall the experience seems to run as a persistent undercurrent throughout.)- 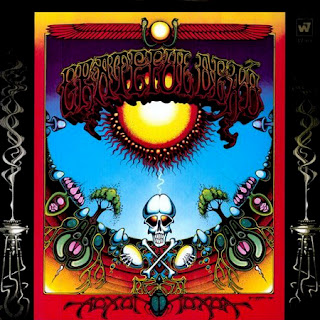 In the same environment? This feels a bit less seedy. There's a poster – advertising some band's '72 tour? - on the large wall ahead of me. Talking to my friend Dee Bee about this poster and going through all the great, rare psychedelic posters Agent Johnny has at home. Say he has a 'Keep On Tripping' poster? Then talking about Grateful Dead's 'Aoxomoxoa' album cover and Johnny's poster of that. What I describe/picture in my head is stylistically the same, but this image has a large fly or something rendered in the middle. I try to show Dee Bee on a phone or something but the image is offset on the screen and you can only see about half of it (and are unable in any way to scroll)-


In Dee Bee's bedroom. I am looking at the assorted comic sort of memorabilia he has collected. It's definitely all quite childish. I am saddened to think he still lives at home. At the head of his bed he has two simple white shelves mounted on white finished tubular steel curved 'L' brackets. On these shelves are 'Frozen'-like dioramas made from cheap, bright plastic – like better quality versions of McDonalds free gifts/toys. There is a poster on the wall next to this for some film. I understand it is quite rare (though the title escapes me). I take it down to turn it around. It's actually made of polythene or something and he seems to have turned the edges in by a few inches – I think to myself he's done that to protect the corners from being stained by the Blu-Tac. Then again, I reason it will just stain a few inches into the poster. On the reverse of this is printed another poster, stating 'From The Makers Of...?'. It's your classic 80's comedy duo effort, one typically downtrodden and one unwittingly elated character side by side- 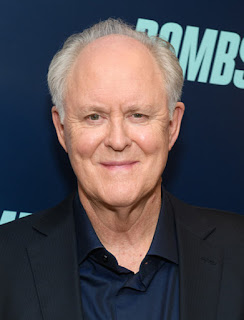 One of these is played by John Lithgow. Near this on the wall is an A4 print out showing a (recognisable?) plastic figure – he has a wide, slightly misshapen grey head with round, staring eyes – that it says is the dictator Steve Reich. I am puzzled by the (Third) Reich association here, trying to gauge that against the musician. An extra wave of sadness washes over me as I suddenly have the sense that Dee Bee is dead and this is it-


Outside and walking away. Can sense I'm on some wide tarmac street or road. Quite busy and I am walking against the general flow of people. To my left some stairs descend to the frontage of an old cinema. It is all black, boarded up and scabby. Some people are loitering there. I'm then walking across a metal grill of sorts, passing over the top of this underpass entrance/area-


Walking in quieter streets. I'm watching as an old black guy finishes scribbling by a drain at the kerb. He's drawn in green and black chalk a circular logo I cannot quite make out. Next to the drain is a bowl with money in it. Is this the third of these I've seen? An old lady comes up to me and I ask her about this. She explains that the logo represents 'no skateboarding' as youngsters are tripping over and falling at drains. I can see the logic of the rough illustration now, the tumbling skater in a typical struck out circle. For some reason we examine the nearby road surface – not sure, as if expecting it to be dented or in need of repair after a tumble? Has it been repaired? She and I part ways and as I walk off I ask her another question, turning to see that she herself has produced a long skateboard and is taking off down the adjoining (steep) street in a zigzag fashion. My question obviously throws her and she stops, expertly kicking her board up and catching it in her hand. Evidently annoyed and exasperated she still politely answers my query-


In some strange dark environment. I am now agonising over my inability to remember my visit to Agent Johnny's. I am trying to remember the train journey, the visit to the LIDL supermarket beforehand, but turn up nothing. I cannot even remember John himself, nor taking a single sip of swill. My mind is completely blank, memories only surfacing of my earlier time visiting with my friend Arr Haitch. This is greatly distressing me and I can see ahead of me a small rectangular area of reflective surface, mirroring my eyes back at me (like the conclusion of the film Taxi Driver). I am desperately trying to catch my own gaze in this (puzzling) reflection. Eventually our eyes meet. There are then more and more of these small reflections, filling my vision, and I am able to meet some of their eyes at some points but not all-
at January 31, 2020