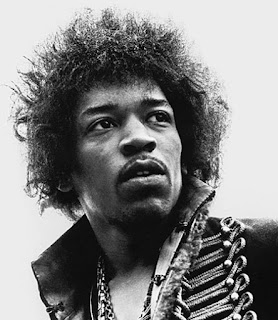 At the artist studio of Jimi Hendrix. He's working in a space very similar to those at my old University building, all exposed concrete structure and cold finishes. He's at the top of the stairs, the front of his unit space screened in part by a huge structural wall, and over to the right there are temporary partitions between his and the neighbouring unit. The ceiling is high and the large windows give plenty of (ideal North) light. Adding to this there is an upright collection (of something, canvasses?) covered in a grey, paint splattered sheet that provides him with further privacy. Hendrix, louche and hatted, works intently in behind all these screens. The studio, like others I have worked in, is rammed with random materials and half-finished/in progress works of art. Immediately to your left on entering, butting against the wall, is a metal storage cabinet covered in paintbrushes, stacks of cds and assorted art peripherals. Over to the right, between the upright canvasses and the partitions is a desk of some sort, also buried under a clutter of art materials. You have to squeeze past these two obstacles to see Jimi properly and enter the cramped workspace - there are small paintbrushes here, stored horizontally (presumably to dry out) and I am conscious that every time I squeeze past I am brushing against them with the back of my jacket, worried they'll fall (and potentially also start an avalanche of junk). He is listening to a cd and asks me to put on Bob Dylan- 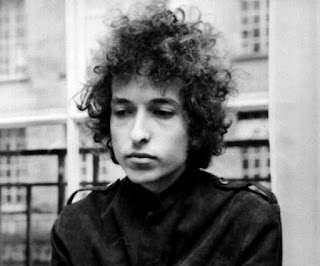 He either asks for the specific track 'Unbreakable' or is the cd called 'The Unbreakable Bob Dylan'? I again make my way from the working space and check in the two stacks on top of the metal cabinet. There doesn't seem to be any Bob Dylan cds at all. I note that it is a (manageable) collection of his psychedelic contemporaries, that definitely includes Country Joe And The Fish. Some of the spines have 60's-ish psychedelic writing and patterns on them, too elaborate for me to read (though I kind of assume they are by Grateful Dead). Digging in deeper behind I am cheered to see a few dance/techno cd singles buried in under discarded sanding blocks or somesuch. I think I eventually take him back something and he changes the cd to whatever it is, some sort of chugging acoustic guitar music (we both know and like). Jimi talks about the piece he is working on and asks me to bring over the Rhino horn he has moulded to complete it – think in composition it's supposed to be crashing up through the floor of his painting/diorama. (There is also a painting of this horn, what looks at first like two (red) arms rising and clasping, but seems to take on a horn shape on second inspection.) I take the Rhino horn, stored as it is in a thick, semi-opaque polythene sheeting, over to him. There is a part of me that wonders if Jimi is on heroin (yet)? He tells me to take the mould and to show it to the comic artist Frank Quitely, saying something (jokingly) like, “go show that old … how he's leading me astray.” I agree to do so, edging my way carefully out of the unit and into the corridor-


As it is hollow I am wearing the Rhino horn mould on my left arm, brandishing it in the air like some strange alien limb. Worth noting it has a sort of unnatural claw-like protrusion about half way down and, as opposed to the material grey finish as it appeared in Jimi's studio, it is now covered in a brightly coloured camo-esque pattern. Being able to inspect it up close I also notice the finish looks more like Rhino skin, rough and mottled- 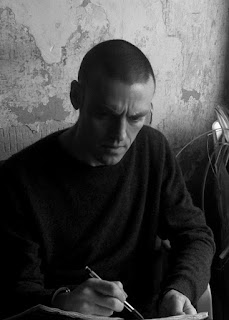 I am walking towards Frank Quitely and he is coming towards me. We seem to be in the same building, but in more of a cafeteria area, populated by small round tables with metal legs and a beech veneer finish. Before I am able to say a word he asks me "if I want to draw Doctor Who?" He explains something about how the comic rights are up for sale. I sit with him and our mutual artist friend Tee Cee (and one other?) at one of the tables. Frank then says something about looking at the art in the latest issue of Doctor Who as it is terrible. We talk about how we really shouldn't laugh at another artist's work and I am expecting the issue Tee Cee takes from his polythene bag to be just awful. It's actually, pretty good, a nice inky brush finish to the bold art over crisp flat colours. During this encounter I am aware of a woman and her teenage daughter at the table to our left – I recall having seen them seated earlier (somehow) and realise that they were negotiating to buy the comic rights (for 1 issue?) of Doctor Who too. I can't work out if the daughter has drawn an issue yet, nor if it is the one we are holding-
at January 15, 2020