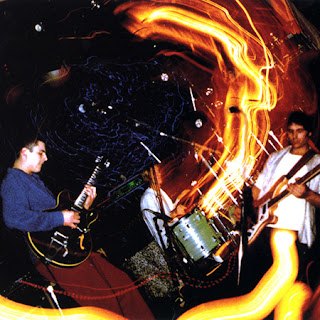 On a bus travelling at night. It doesn't seem that busy, or that there are many seats. I can really only picture myself seated and space around me. Obviously the driver is seated ahead of me (both of us on the left of the vehicle). 'Germs' by Acetone begins to play over the sound system. I am quite startled, and happily so, to hear this. It doesn't sound exactly like the recorded version, maybe a bit slower and without vocals? This is followed by 'Final Say', which again I recognise even if it does not sound quite like the studio recording. This is exciting for me, and I want to be sure to talk to the driver about the band-


We are back at the hotel(?) and I make a point of talking to the young driver in the bar. The environment here is not hugely different from the bus. It's quite dark and doesn't seem that busy. I don't recall the bar itself, but I think I have a pint of beer. The driver sits at a table and opens a small grey laptop. I stand to his back, to his right. After our initial talk he then introduces me to a girl he's talking to on Skype. Even though they are talking she only appears on the laptop screen in profile. He then chats more to her about things, including me. Is there something about a podcast and how that would be proof of...?- 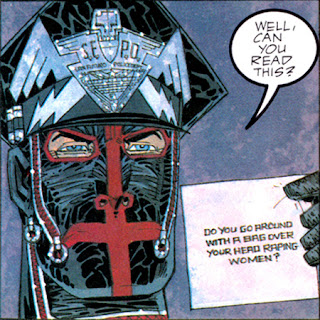 I am with (the comic character) Marshal Law and we are infiltrating/have infiltrated some sort of criminal base or stronghold. I'm aware I have no weapon at all. We seem to be trapped (or hiding out) in a tight stairwell. The building is very plain, simple blockwork and plaster walls. Our pursuers wear sort of army green tight fitting gimp costumes (like S&M Norts from Rogue Trooper via Marshal Law's world). It is very tense as the troops close in on where we are hiding. I have to judge where they are coming from, listening intently and watching carefully for any shadows on the opposing wall that might betray their approach. The first comes from my right and I whip away his legs - the stair is sufficienty steep that I am practically at that height - dragging him down to Marshal Law who then dispenses him with a single shot. The next I slightly misjudge and he arrives from the left. Unfortunately his gun jams and, unable to fire shots, I quickly drag him down too. The third approaches from the right again and we dispose of him with ease-


I have joined a crowd of gig goers - did they flood the stairwell and I have followed them out into the night streets? - and am walking with them. They are all sort of indie-emo types, dyed hair and dark, alternative clothing. I am wondering where Kay Emm is. I'm sure she'll let me know she's alright though neither of us has a phone. Am I walking up Bath Street in Glasgow, a bus stopped at the lights, but also aware the road is closed? The bus is also heading into town, against the natural flow of traffic-
at December 30, 2019