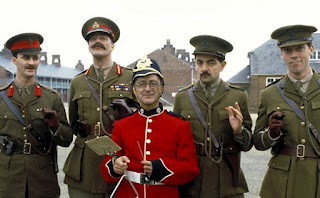 The setting was much like Blackadder Goes Forth - he had his moustache and Baldrick and Captain Darling were about too. I was there too, but not in the role of George. It was as if Largs railway station was at, say, one of the bridges over Charles Street or John Street. Positioned much like the Emm's house, except it face the rails, which were about 20 feet below in the darkness of the night. At first we were all inside and Baldrick was introducing us to some sort of dog/pet thing he had befriended. It ended up getting some tag meaning that, unknown to Blackadder, it would be left in charge on Wednesday (to much humourous consequence). Then we were standing outside and looking over the opposite side of the railway bridge into the darkness. I said something about the troops down below. Edmund and I went for the gag until I said, “startled” at which we all fell about laughing. Going back across to the station Captain Darling said something about, “maybe this time we'll keep to the script.” We all fell about laughing again-
at December 11, 2019