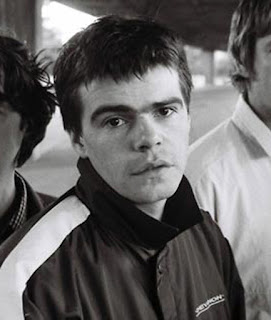 
At some sort of function in a smart house. Very clean and crisp feeling, nice green-ish patterned wallpaper and lots of dark timber fittings and furniture. Daytime. Soft light. A few of us – think we're in suits? - are talking. Ahead of me the room opens directly into a corridor and immediately round the corner another group of men are gathered. In response to something – something I overhear? - I make a loud quip in a “I'm Gonna Git You Sucka!” style voice. As soon as I say it I (and those around me) realise it's deeply offensive. We walk out into the corridor/hall and I am faced by an older man. He looks slightly American Indian but with Chinese features too. He has long, straggly dark hair. I am VERY apologetic towards him and am nearly in tears-


I am sitting (in the same house environment) with Tim Burgess and a woman nicknamed 'Flower'. Tim is to my left and Flower is next to him. Tim's hair is short and unkempt, somewhat plastered to his scalp and face. We are talking. Tim is talking about how you cannot make an album if you are stoned all the time, mentioning that Ali (Campbell, from UB40, I think) made three records for him and they were all no good. At one point it looks like Tim and Flower are kissing, their faces are very close together (I can really only see the back of Tim's head). Tim then turns and seeing his profile he has a tiny, 1cm long (if that) cigarette/joint between his lips. It's as thin as a propelling pencil lead and is smoking at the end. He then offers me what looks like the shaft of a propelling pencil. It's hollow at one end and smoke is rising from it. The other end, which has what looks like a touchscreen pad on it is the same, only this is a brown substance that is also smouldering and crackling. I take a few hesitant sniffs of the smoke. Tim is encouraging me, saying it has acid in it. Has Flower collapsed or taken ill? In no panic at all Tim takes her to go upstairs. As he heads off with her I am talking about their third album, Up To Our Hips, and how to me it sounds like a record made by people who were stoned as opposed to, say, Dark Side Of The Moon, which is a record that sounds stoned in itself. I refer to the “washes of cymbol” and other such things- 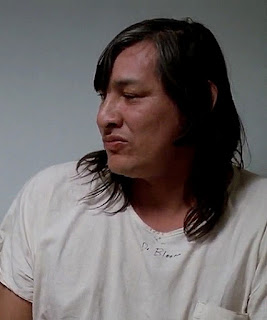 I follow upstairs. I am concerned that I will begin hallucinating after inhaling. There is a big guy upstairs too, like the American Indian from One Flew Over The Cuckoo's Nest, and he sort of tails me about. Do I hear a strange, “wah wah!” noise from some bird, worried that my trip has begun? I decide to get my guitar, thinking that by playing that I will anchor myself should I start to hallucinate. There's a small sort of timber shelf and it has several plectrums on it, all in some sort of disrepair. Some are rounded, almost circular, some are cracked and in fragments. I am thinking I can take 2 of these as being at my Gran's(?) they're hardly used and mine anyway. I start to play (very well), getting great, raw guitar sounds with simple variations on the standard A-Chord fingering on the lower frets. Both my strumming hand and fretting hand seem to be making music almost independently. At one point I run the plectrum down my front – it scrapes (with a fantastic sound) down what looks like simple sack material, leaving a stream of water in its wake-


I am looking for Tim. I go into one room – are there two poeple in there? - and make my quiet excuses and leave. I enter the room next door and at the end of the corridor. Flower is lying on a bulky timber table and four or five people, including Tim, are standing around seemingly concerned for her well-being. Tim asks me to leave-
at December 17, 2019

Email ThisBlogThis!Share to TwitterShare to FacebookShare to Pinterest
Labels: ZZZ, ZZZZ - The Charlatans