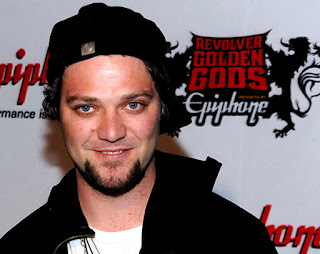 In a large school-like assembly hall. I am there, as are both my brothers and my friend Enn Bee and his wife Eev Bee. It seems everyone has been allocated somewhere to sit aside from myself. The stage/presentation area is to the front and is about 4 metres wide and curtained off to about 2 metres above the floor level, screening it from the seated. My brothers have a seat each in the rows nearer to it. They are arguing and I recall one skidding a pen along the floor in disgust to the other. I end up taking a seat in the row next to Enn Bee, though I am aware my little brother is not present in the row in front, and hope that everyone will just shift over a little in order to squeeze me in-


Now at a different awards ceremony. It feels like it has Oscar prestige and press attention, but the setting is much lower-key, the hall smaller and more intimate. Bam Margera (from Jackass) is on stage accepting an award. He is peppering his acceptance speech with swearing, much to everyone's collective (but somewhat anticipated) dismay. At one point he is talking back and forth with his mother in the audience – she's a kind of blonde, biker mom – and she shocks all by swearing in return-


Now outside, looking at a wide shot of a back alley. A plain concrete surface – on a slight incline? - meets a similarly plain concrete wall on the left. Against this wall is a large commercial rubbish bin. Surrounding this, occupying about half of the viewpoint, is a huge pile of... Is it pizzas, discarded following the awards afterparty, or a giant mound of sick? All I can clearly ascertain is this great yellowy-burnt-browny heap with a sort of fatty separated liquid pooling at its perimeter. I think there's someone lying on top of the heap by the bin. This scene elicits a collective “UGH!” from the invisible onlookers. Bam approaches from the right and attempts to scale this mound and suddenly, when he's about half way across, he simply disappears, swallowed beneath the surface of this mush. He eventually wrestles himself from the mush at the edge and staggers, coughing and sputtering, from the hold of the “matter”. It's as if the watching collective has drawn breath, waiting to see if he'll be sick, which will then determine the outcome of their own ultimate reaction-
at April 07, 2020