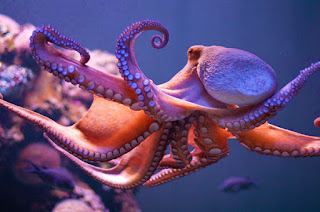 At the seaside(?) and a group of us are gathered around a large-ish rockpool. It's hard to ascertain whether we are adults or much younger... The rockpool itself is not sunken - we are not looking down into it - but raised up and we peer over the edge like a zoo exhibit. There is a bearded man with us and he is some sort of hunter gatherer type, reaching and splashing into the pool to display the sealife. He pulls out some sort of eel and chews at its head, eventually biting it clean off, holding the limp body in his clenched fist. There are dozens of small octopi visible huddled around the edge of the pool just under the surface. The are not quite representative of the actual species, having bulbous heads with two blank eyes staring straight ahead. Their flesh is pasty as a per a cooked prawn, with the typical pinkish colouring in at the joints. Their legs, in as much as they are visible, are tucked tightly in to sit under their round heads. I mention these to the hunter and he says they are edible, yes, but not worth bothering with- 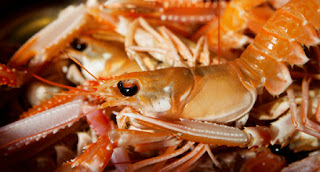 Suddenly down the pier(?) to the right from the rockpool there is an immense struggle and a huge langoustine-esque creature batters down onto its back on the timber. I'm guessing its been wrestled from the sea by the hunter. This deep green beast has huge plates of overlapping shell all along its body, it's head/face more reminiscent of a crab, protected as it is by the shell. It seems to rear up and look at us in a curious manner and-
at August 02, 2019

Email ThisBlogThis!Share to TwitterShare to FacebookShare to Pinterest
Labels: ZZZ