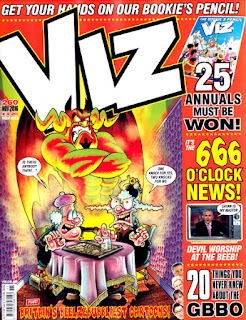 On a Scotrail 1990s train. I am with my mother. We are sitting side by side on the set of seats facing the pair of doors at the rear of a carriage. We are facing against the direction of travel. Across the carriage on my left sits Ayy Arr and a girl. He looks quite youthful. From my point of view only he is really visible and his body hides her - he's sitting a little forward in his seat too. They are facing the direction of travel. He is talking incessantly about drawing for VIZ comic. All I keep hearing is, "Viz... Viz... Viz..." and I am really hoping my mother cannot (over)hear as I am a failed cartoonist. This annoying (mostly) monologue continues for some time before, to my further embarrassment, he switches it up and starts mention his time drawing for The Dandy as well-


My mother takes out a match from her handbag and lights it. She quickly shakes it out as the guard approaches. (The guard appears to be, for some reason, the same Ayy Arr.) My mum puts the extinguished match in the small lip of the carriage window, in plain sight. I can vividly remember a close up of the match, noting that it has the withered shape of a burnt match but that the wood is all crisp and new. Of course the smell of the 'strike' lingers in the air and Ayy Arr asks if we can smell something burning. There is some sort of discussion about a train carriage being on fire? We then take another match and light it, holding it against a sort of plated upstand that is in the middle of the floor. It looks like an armoured armrest, consisting of mostly metal plates but with some fabric (and wiring?) visible. Having held the lit match somewhere near the top of this there follows a debate as to whether it has indeed caught fire or not. I am convinced I can see flickers of flame here and there and that we are in trouble. Ayy Arr evidently agrees as he grabs a fire extinguisher - he takes this from some sort of similar floor bracket/upstand - and proceeds to spray the slowly armoured burning upstand with some sort of gassy substance. As he is doing so it looks like the train has stopped and lots of people are getting on while we are worried there's a fire and they should be getting off? I think I am stuck trying to walk against this oncoming crowd-

Some strange old house. Thin timber floors with holes in them. I remember being in a long, dimly lit room with my little brother. There is a stick of incense with a slight bend before the top and we are worried about leaving it overnight to let it burn down. We decide it will be okay to leave it. I leave the room and narrowly miss falling through a hole in the floor to my left-
at August 16, 2019