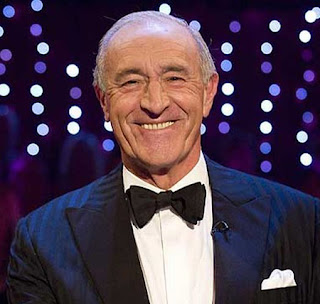 At the theatre. I think I am with Kay Emm. It is the interval and I am wanting to go to the bathroom (even though it feels like I have just returned). We are seated along the right hand side of the stalls, in seats at a right angle to the stage. The stage itself seems to be on the same level as the floor, a large curtain half-draped across for the break. For some reason I understand (or am told) that I can go to the bathroom via the stage, so I get up and walk over. I think an older woman perhaps told me this but anyway she has the same idea. Len Goodman and his dancing partner are running through some steps. The older lady and I walk over to the right hand corner of the stage and peer down a spiral stairwell. There is a small sign showing this leads to a ladies bathroom (and another for something else). I walk off out into the vast foyer area of the theatre. It seems very confusing in terms of layout and an usher – very much like the bellhop from The Grand Budapest Hotel – brings a stair to my attention. This is a tight stairwell (this time with a square footprint) that disappears into the middle of the floor. I descend- 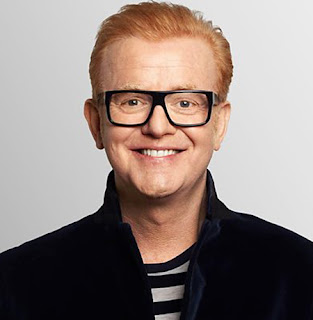 I am then in a strange sort of rocky area. There seems to be 2 ushers here – is one almost identical to, if not, the chap from up the stairs? - and there is a coin-operated barrier, of the classic 3 rotating metal prongs variety, inset into a rock (at about 2 feet off the ground). The rock here has a slightly slick, damp, deep underground feel. I sort of skip over this small barrier and one of the ushers says it costs 20 pence. I check in the wee watch pocket of my trousers with my finger but have no change. The usher says it is okay and puts in 20p of his own. Unfortunately the machine doesn't register/recognise it and it just falls from the lower slot onto the rock. There are two young guys sort of behind me in the queue and one of them also skips over the rock. The usher collars him and insists he pays 40p, to cover both his and my entry-

I assume he does as I am now in a vast field where there are lots of guys peeing. The problem is there isn't really much sufficient “cover” to do so with much privacy. As such I walk on through this field, passing a few guys peeing in at scrappy bushes or trees on my way. I pass a slightly rough looking couple who seem to be walking their dog here. I walk towards a large house, facing me. To its rear is a terrace of 3 or 4 other houses, though these properties face away, off to my left. Back to back, though separated by a sort of patch of road, are another 3 or 4 houses, this time facing off to my right. The large house belongs to Chris Evans and he is visible in the garden with his shock of red hair, playing with some children. He is ranting and raving, swearing about the fact it's not acceptable that guys are hanging around and pissing- 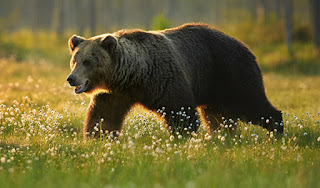 I turn away from these houses and head back in the general direction of the stairwell. I pass the woman from the rough couple and she gives me an evil stare. I come to what I think at first is their dog lying on the grass, but what I soon realise is a bear. It snuffles round from its' sleepy position and rises up on its' front legs. It has a nose with a sort of kink in it, giving it the slightly comedic look of an elephant seal. It also fixes me with a intense stare. Is there another bear or just the one? I decide I don't much like the look the bear is giving me and turn to my left, heading quickly towards another house (this sits on its' own) in the distance. I am conscious that the bear is still watching me and quicken my pace. As I head round the back of the house and prepare to climb up the sort of curved, mottled back wall into the garden I am quite aware the bear is up and running and in pursuit-
at October 04, 2019