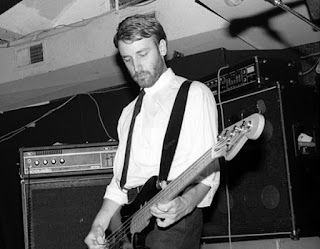 Vintage looking, 70s'-ish TV concert footage (much like The Old Grey Whistle Test). But this seems in my mind to be Jools Holland. Kay Emm and I are watching and discussing this in voiceover. The footage starts with film of Peter Hook, young and bearded, at the drums, the cymbals and stands on either side framing his thoughtful face. This cuts to a guy on percussion. He has quite curly hair, a long nose and wears a somewhat blank expression. He has shakers and such. Bernard Sumner is visible in the background on guitar, mostly seen in full. They begin with quite an eclectic percussive intro, prompting Kay Emm to ask, “what is this?!” I say that it is Joy Division and that she needs to be patient and to wait for the singer.... who it transpires is not quite Ian Curtis, but more of a cross between him and Iggy Pop. His hair is a dark blonde tousled indie mop, and he wears a tight blue t-shirt and denims. In essence it is Ian Curtis, only with more of Iggy's wilder movements and vocal howls and yelps. Certainly less blank and morose. He leaves the stage and proceeds to run frantically around the auditorium-

It seems to be a huge arena and he runs up some stairs at the perimeter, singing and gesticulating. Confronting a fan/reporter their exchange ends with Ian/Iggy (accidentally) punching him in the face – the guy, with his long hair and sandy raincoat, sort of looks into the TV camera in shock, showing off his bloodied lip. Ian Curtis, here looking very much an amiable surf bum facially, seems to momentarily awaken from his musical trance to smile and acknowledge what has happened before just as quickly again surrendering to the thrashing and writhing. He then – to our complete disbelief – takes a short run and jumps, launching himself into the air. He descends slowly, curled up into a neat little ball, arms tucked around his ankles and drifts across the centre of a scene of perfect blackness – he is in a complete empty space, nothing visible around him. Kay Emm and I are flabbergasted (and concerned) as he sails peacefully through this epic void. He then lands quite perfectly near the stage and we realise (as the camera switches) that he has jumped down from a much higher level of the arena, landing near the stage - it seems to sit in the centre of the venue, with a bank of seating climbing steeply up to the left, then over, then back down on the right-
at October 29, 2019