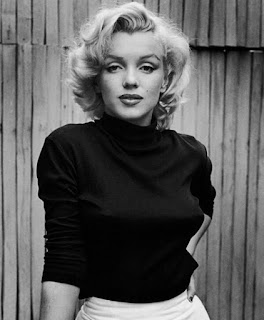 Driving along a motorway. A Marilyn Monroe lookalike was walking along at the roadside. She was wearing a white shiny dress. Despite being blonde she did not really facially resemble Marilyn. Her cheekbones and jaw were more defined. She was still very beautiful though. Pee Bee, myself and someone else saw her. I tried first to chat her up. We all sort of competed for her attention in turn but she kept being very non-committal. She continued to walk ahead of us - we would lose her and we'd either catch up on her or she'd suddenly catch(?) up on us again. At one point we all were eating bacon. I was carefully chopping out the fat on mine. The Marilyn-alike was beginning to come around to us at last-


First day back in my second year of University. Jay Cee had some kind of lock up full of models and related stuff. I met him and helped him empty it. I got some white plasticard boxes he didn't want. When we got back to Uni(?), 6 other folk and him, as he told me on the steps, were off to Spain for 2 weeks. So off they went and I was lost. I went inside and up the stairs. Hundreds of folk milling about. The real worry was that I was late and did not know which Unit I was in. The tutor Pee EmmCeeCee was hanging about in Unit 3. Like so- 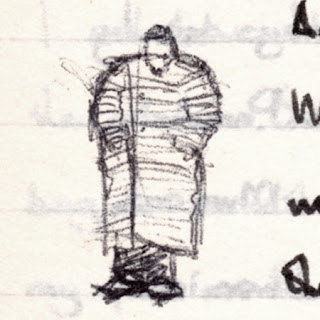 As usual he looked totally mental. I went along to Unit 6. Emm Cee was the tutor there. I glimpsed him through all the partitioning screens at that end. I was sort of following Ayy Cee about up and down the corridor. He didn't have a clue either. I could not find the list of Units. I talked to a (man-like but actually a) woman tutor who was trying to help. She gave us a tiny wee sort of envelope filled with tiny wee Post-It note paper with silly designs on them. Like so- 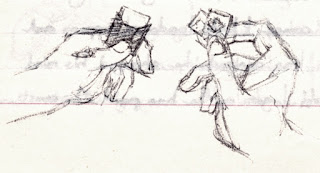 I then took a folded bit of paper off the wall opposite to the noticeboard area. It was a useless old results sheet or something-
at June 12, 2019