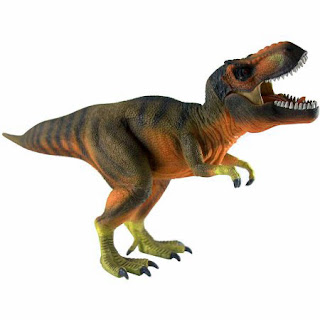 Some sort of huge circular shelving, packed like IKEA's furniture warehouse. Only this is for toys and you enter though a great gap in a curved white wall. I am with both my brothers and we are wandering around in this vast place. I examine a Tyrannosaurus Rex on one of the shelves. Although it is facing towards (what looks like a chunky) Star Wars At-At I seem to know that it is intended to (somehow) pull it like a chariot. The T-Rex is fascinating as I keep thinking the texture and look of its 'skin' is very much like a Morton's Roll, crisp and a mottled brown-

Young girl with long, delicate light brown hair. She has it tied up on top of her head and long and wispy at the back and sides. Simple clothes of a white t-shirt and denims, rolled up a little at the bottom to show white socks. She and her boy pal - it feels to me like one of them likes the other much more than he or she knows - have set up boat rides. Puzzled as thinking she needed money to acquire the boat to then try and make money. It's definitely her dream and she has worked hard for it. At times I'm sure she is on crutches, lifting her right leg-

Dream jump or cut and I am watching the moment where the boy leads the young harbourmaster and the girl's mother to the berth to show what she has been up to. She lies, stiff as a board, on her back in the bushes that look onto the jetty where the boat sits. Clearly picture the bottom of her legs, the white socks and shoes lying so still. Behind her is a knotted white polythene bag with the money she has made. I have a sudden flash of a bold black on white newspaper headline that reads "Dammit! There is nothing worse than a lack of cards!", lying across the ground. The girl lies quite still as the 3 other people chat and gesticulate. The girl is then right with them, making 4, and I hear, and am slightly puzzled by, the harbourmaster saying she had made 30 pounds that was in the white bag. When you try and divide that up by the boat rides and people it doesn't seem like a lot of money to make such a fuss. Then (I think) the boy says something - for some reason a noise prevents me hearing it - and the look on the girl's face is pure heartbreak, absolutely devastating. Then, as if the 5 of us are actors concluding a play - everything thus far has been outside and bright and airy - I walk from the bushes to join them and we go off to the left in single file, filing up past the end of the rows of watching audience in a dark auditorium. I am doing my very best to look calm and together in spite of the crushing sadness I feel inside because of the girl's upsetting and haunting look-
at December 01, 2018