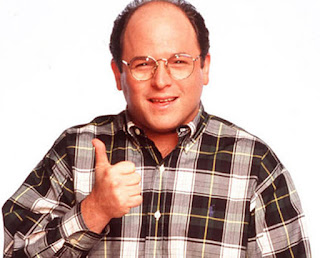 I am watching an episode of the American sit-com Seinfeld. The character George Costanza, in a light shirt and braces, is sitting at a table/desk facing the 'camera'. To his left sits (someone who I instinctively know is the actress) Elizabeth Perkins, the back of her curly haired head about 2/3 in shot and in slightly soft focus, being near to the lens- 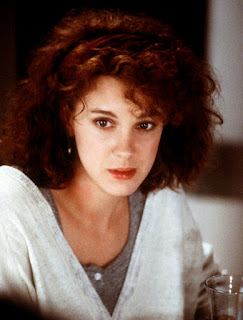 I am joining the action mid-sentence - something of a hangover from the previous (lost) dream about my little brother staying in my old flat? - and George exclaims, "-and I'm going to f*cking lose my first f*cking job!". Elizabeth scolds him for swearing like this. There is a strange, barely detectable jump cut here, and I seem aware that I am now looking at the back of Jerry Seinfeld's head. There seems to be another jump cut, close in - Seinfeld is now weeping and clutches at (what I eventually realise is) George's exposed left breast- 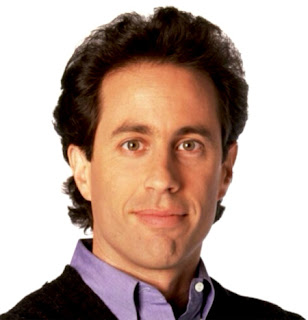 George is now topless, with fabric epaulette's on his shoulders, and Jerry, thoroughly milking the comic moment, proceeds to pull on his breast like a towel, stretching out lengths of it as he dries his eyes/comforts himself. (I realise the epaulettes are likely present to allow for the FX of drawing out this long, fake breast.) At one point a length of the rubbery flesh appears spattered with tomato sauce and cheese, the audience groaning in mock disgust. (I am quite sure as this scene unfolds that it is to infer that George has stored a slice of pizza under there, also acknowledging that it's the wrong side up for that too, but...) Then a further jump cut as Seinfeld is concerned with the right epaulette which, fixed at the side of George's neck seems to be scratching at his skin on the right, arching back and forth as it does so, some small black tab scraping at the skin and threatening to infect him with-
at November 18, 2020