At Presto's supermarket, Largs. Talking to Gee or he was hanging around. Went out on my lunchbreak with my friend Cee Haitch. Wandering about Largs. I wanted to get back in 1/2 and hour in case I missed Kay Gee's visit. Walking out of town. Came to a street that looked like this- 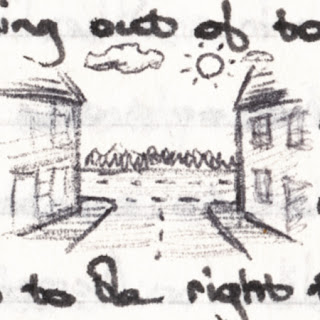 Across the road was all grassy with wild flowers and bathed in sunshine. We were going to go to the right to head back to the store but instead we took the left. The scenery was all very valley-like, like the Glen or Kelburn Country Park. The landscape was all very dark, rocky, mossy, green, and steep with plenty of pools, streams and small waterfalls. Up very high amongst trees which were tall, twiggy with a smooth grey bark and no leaves. Lots of rope bridges, like so in plan- 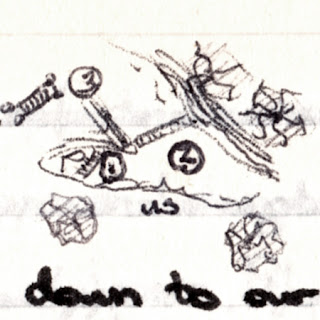 Rope bridge (1) was nearest to us, going from our left and out. Much further down to our right was another large rope bridge (2) that spanned (near) the valley floor. To our far left there was a further bridge (3) that hung in the air about 25m off the ground- 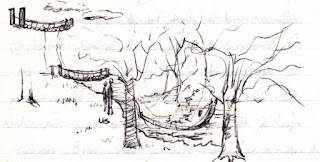 There were vines trailing from this bridge and onto bridge (2). There were so many twigs and overhanging branches that Cee Haitch commented about how like Tarzan it all was. Encouraged to swing on the branches and so on. Seemed to recall about the huge alligator that lived in the pools here as the area seemed so familiar from somewhere else. I accidentally slipped over the edge where we had been standing and was left struggling to hold on, losing my grip. At this point I became an onlooker rather than a participant. It was like I was watching a Tarzan film. I had been replaced by a blonde, loincloth-clad Tarzan-type together with a dark haired explorer type. As Tarzan slid towards the pools and rocks the explorer guy took up a position on the second rope bridge to our left. He kept nearly falling off, scrambling and hanging onto the ropes at the side. He eventually fell, joining Tarzan in the pools below. I then seemed to become the explorer type as I was suddenly guddling about amongst the close rocks of the valley floor. The alligator had been about and I had lost Tarzan who had gone in for the kill. Now in amongst running waterfall environment when I saw Tarzan like so- 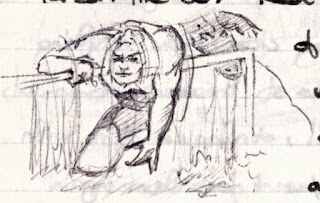 He had trapped the nose of the alligator under some white football goalposts. By using the edge of a rock he had somehow managed to to wedge it. Thinking its snout would shatter I thought about the goalposts' means of support and, as the water from the fall splashed over them it all slipped, vaulting the alligator into water and rocks below. Tarzan and the posts followed. Again I became a removed onlooker, watching Tarzan clatter off rocks and finally disappear under water. Now viewing from underwater, Tarzan struggling as he attempted to get his bearings. Through the gloomy water I could see a dark shadow at his rear. I thought it would be the explorer type and not the alligator. Whether it was or wasn't, the 'gator suddenly appeared up very close and everything went crazy. Loads of thrashing in the water, visions of the 'gator's tail as it struggled with Tarzan. After a momentary loss of what was happening I saw Tarzan had pinned the 'gator to rocks by a piece of splintered wood- 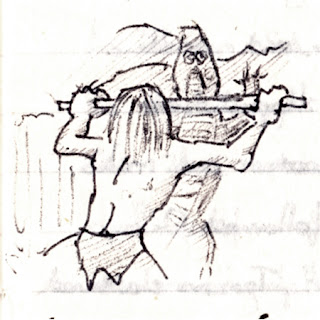 The alligator looked like a sort of Aardman Animation style (Chewit's monster) now. As Tarzan went in for the kill it spoke to us. It was like it also had some form of a drawing on its underbelly. I'm sure it was of (my old school friend) Cee Cee and it looked like- 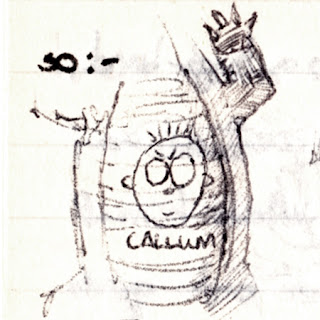 The alligator gave us a big speech about being moved (by us) to a smaller pool further up the slope. We co-operated, placing it in a puddle barely deep enough to cover it. The pool was up near where we first overlooked the scene- 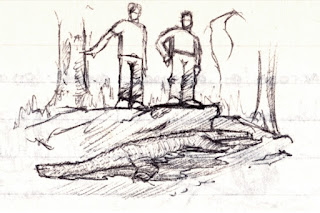 The characters had now reverted back to Cee Haitch and myself. I couldn't help but wonder what would happen if the pool got very hot and dried out. Would the 'gator die? Then there were 3 of us. One of us, who somehow seemed to be Tarzan again, tried to swing/climb by vines up to the suspended rope bridge in the sky. Really scary because he kept holding on and falling off and then swinging back. Eventually he made it and, as he stepped through the large wooden poles to the left God appeared. Suddenly, once again an onlooker, I could see 3 people being transported across a gorgeous sunset on a huge hand- 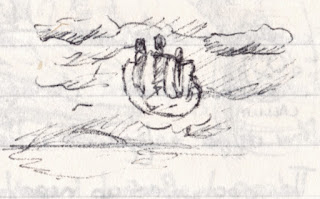 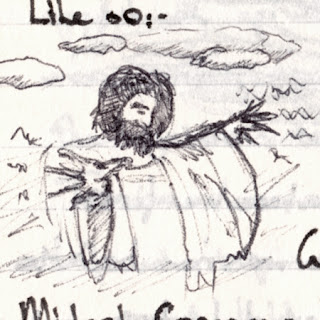 Arriving back I was now myself again. Back at the house I was going to see Jay Eff to tell her how I felt about her. I was going to her room or house - I knew where it was. Instead I ended up in our back garden where my little brother,old friends Pee Dee and Cee Dee (amongst others) were playing football. They asked about the tiny cigarette I was smoking. Glad had given all the travellers on the hand one each. I took three small draws and than a deep one. It was really, really smoky. I stubbed it out until it was obliterated on the ground. Then I knelt down and blew away the ashes so that my Mother and Father would not notice them. I really wanted to keep the cigarette stub-
at May 11, 2019