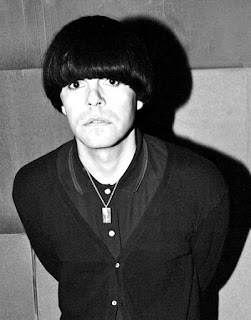 
I'm with Tim Burgess in a sort of dimly lit student union environment. We've been discussing/analysing a sort of burger-like construct, made from 3 or so layers of greeny/yellowy thick plastic piled on top of each other. Are there words written on it? Not sure if we've even been responsible for assembling it. He seems very thin, dressed in a smart, skinny-fit black shirt with matching jeans. I see his body, lanky and hunched together in the seating, worryingly so, his arms and torso about the same width, but not his face. I sense, rather than see, he has the strange dyed-black pudding-bowl cut of 2010's Who We Touch. Martin Blunt, looking wired and lairy has arrived and is very much 'in our face'- 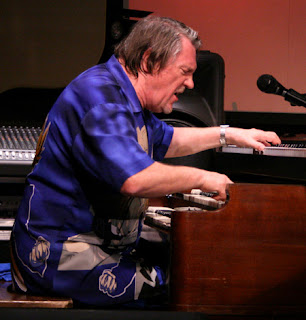 Desperate for something to say I say I'm desperate for something to say, eventually mentioning that I had seen Brian Auger's Oblivion Express - with a spritely Alex Ligertwood in tow - in concert. I marvel and enthuse about Brian Auger being 75 years old and putting in such a spirited and energetic performance. The pair of them agree about his continued Hammond Organ skills. In the midst of this (in)tense conversation I see Mark Collins and Tony Rogers arrive. They are carrying a thin striped camp bed mattress each, complete with a (loosely) fitted sheet, and proceed to bed down on the floor of the union behind where we're seated and-
at June 19, 2018